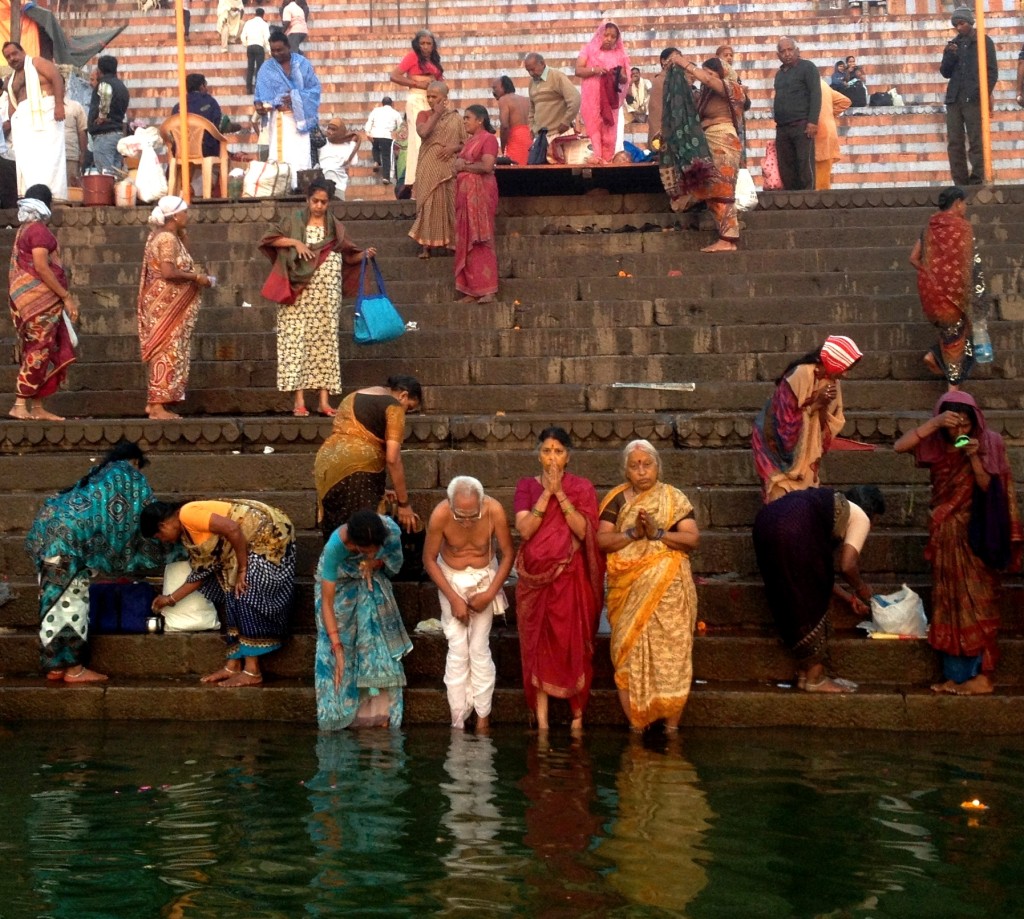 Morning sunlight washes the Ganges in rose-infused haze. We row away from the bank, our wooden boat under the expert guidance of an elderly man as small as a ten-year old. Half naked pilgrims bathe at the famous gnats, bloated cow carcasses float by and the ever-present smell of curry and garlic, urine and rotting food accompanies us.

We are in Varanasi, India – and our pre-programmed thoughts on the world have disappeared.

Nudity, human waste, cremation – it all happens out in the open in Varanasi.

And I can understand why Varanasi, while one of the holiest places on earth (Hinduism), seems like hell on earth to many. To get to the banks of the Ganges – almost always a human crush of seekers – you first tackle narrow streets filled with cows (and their offerings to the pavement), mad tuk tuk drivers, bicycle riders, motorbikes that don’t swerve to avoid you, hundreds of corralled pilgrims waiting to visit temples – spitting, urinating, throwing food anywhere it lands – dressed, mind you, in the most fabulously coloured cloth you will ever see.

Then there’s ash-covered, naked holy men squatting on the ground, a gauntlet of boats to run to get to your own (trying not to think of what will happen if you fall into the most polluted river on earth). With this thought, the first time I nearly fell – and I refuse even now to think about what I slipped on – I asked our guide what he thought would happen if I did.

Exactly. So to avoid the situation entirely, I decided to simply believe I wouldn’t fall in…and it worked :).

Everything we think in life, we think because of pre-programmed beliefs. Beliefs that came from parents and society. We are programmed, the minute we start learning, with beliefs that depend entirely on which country we’re from, which race, which gender, which class, which religion.

Monitor your thoughts – do you read the above description of Varanasi and think you would never go because of your perception of how unsafe and disgusting some aspects seem? Or are you immediately fascinated? Do you see the differences as strange and appalling, or simply… new?

To me, rowing along the Ganges was similar visually to a Gondola ride in Venice. The beauty of the architecture, the romance of the sun on the water, the faded colours of history. But it is a Venice imbued with intense spiritual vibrancy, a Venice filled with raw humanity rather than lovers and tourists, a Venice ripping back the onion skins to reveal the core, the unity, the source.

All places are ordinary to some and extraordinary to others.  Only your perception makes something strange or disgusting or wrong or right or beautiful. And it isn’t even, truly, your perception. The truth is, everything just IS – and you can believe whatever you want about it. You really can.

Because your perception of (mostly) everything in life didn’t come from you in the first place, the things you believe as TRUTH are simply the truths you’ve been programmed with. Someone else will have entirely different truths. If you follow Hinduism, you may believe cows are holy and you would certainly never kill or eat them. If you’re from the West, a cow is often nothing more than a three dollar burger.

What is it that makes people believe that, fundamentally, their truth is the real truth, and someone else’s truth is just a ridiculous untruth?

The key is to look at everything with an empty mind and eyes that simply see what IS, without a pre-determined opinion of what IS.

Emotions still arise – be it sadness or happiness or empathy. But if you allow them to rise without the pre-programmed belief, emotions subside into pure wonder. Everything is simply new. Fresh. Astounding. Something to learn from. Something to expand your experience.

It takes some effort and discipline to be aware of when you’re being programmed, on top of the programming you’ve already received. Most people I spoke with before I went to India, whether they had been or not, made the following remarks:

“Don’t eat the food, you’ll definitely get sick, everyone does.”

“Why would you want to spend your money to go there? It looks disgusting.”

“Don’t get on trains/buses/planes, they crash all the time over there.”

Hmmm. I didn’t get sick, (and I definitely over-dosed on curry), I didn’t have any vehicle issues and the ‘disgusting’ part of it just didn’t bother me. I could have chosen for it to bother me, but I didn’t. I chose to look, see and learn from an empty, authentic space.

I’m grateful I know I’m free to do this, or I may have experienced the horror trip people seem to keep having in India or Asia or Africa, due to the pre-programmed perceptions they go there with, from the people who’ve had horror trips before them, or simply heard of horror trips, or – the worst offenders – from the people who watched it on TV.

Ever watched a monkey copy exactly what you do when they steal your sunglasses/drink bottle/whole bag of bananas…?

That’s not to say issues don’t arise. They do. But how good or bad they are, and how you deal with them, is completely reliant on your perception of them. And you can choose your perception.

First things first. Think about it next time you’re about to (unintentionally perhaps), poison someone’s perception with your own. Just because you think you’ve had a bad experience is not a good enough reason to program someone else with one (it’s that simple to program and be programmed – hence the monkey reference).

The act of being aware of ‘negative’ opinions you spread to others, will help you remain aware of what they spread to you. It’s no different to covering your mouth when you sneeze. You become aware of it, and you cover your mouth. The aim is to become aware of the integrity of your words, and throw them out, if you need to, before they contaminate someone else.

Soon you realise everything is nothing but an opinion. And you realise how heavily programmed you are. As children, once we’ve learnt how to love and how to do the practical things we need to do in the world to survive – all other beliefs can be discarded. This awareness alone is enough to short-circuit the programs in order to see life again with fresh eyes.

Hindus believe that dying in Varanasi is the luckiest thing that can happen to a person – because you go straight to Nirvana, no more lives, just heaven.

But once you rip out the old cords plugging you into the system, and simply tap into your own source, you realise Nirvana is already here, and that you don’t have to wait in the line to get to heaven…