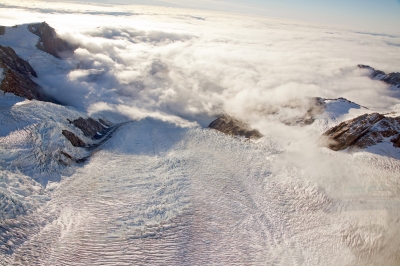 If you’ve ever tried building a snowman, you know that you don’t just pick up snow handful by handful until you have a snowman. That takes way too long.

Instead, you first get together a couple of handfuls of snow, and make them into a ball. Then you roll the ball around on the ground, getting it to pick up more snow through its own weight. As the ball grows, it picks up more and more snow, and before you know it, you’re rolling around a huge 20-kilo snow boulder (snowlder!).

Personal development often works like that, too. Making a bit of a change makes it easier to continue making changes in the same direction. I call this the snowball effect.

And today I’ll show you how to harness the snowball effect to make big changes easy.

How the snowball effects works

Some things have a natural way of attracting more of the same.

Beliefs, for example. If you believe you’re ugly, you’re going to notice evidence that supports this, and ignore evidence to the contrary, because it doesn’t fit with your model of the world.

This sounds a bit disheartening, but it works in the other direction, too. If you go through the process of busting your limiting beliefs, you will build up a snowball of evidence for a positive belief, to the point where it displaces your previous negative belief. This new positive belief then takes hold and builds on itself, without conscious effort on your part.

In this case, the snowball effect happens because beliefs have a way of directing your focus and thoughts to reinforce themselves.

In other cases, the snowball effects occurs because of a positive feedback in internal mind states, or in external circumstances (making friends, for example).

Among other things, you can harness the snowball effect for:

Let’s first have a look at some examples, and then tackle a general plan of action.

Examples of harnessing the snowball effect

I have covered this before in my article on gradually building your confidence. (Click the link for more detail and “pretty” pictures.) The idea is extremely simple and extremely effective.

You pick an action that you would like to be able to do, but that is currently way outside your comfort zone. And I don’t mean that it feels a bit uncomfortable. I mean so way out of your comfort zone that you freeze up like a deer encased in ice if you even think about doing it.

But you can harness the snowball effect to make that kind of action possible for yourself surprisingly soon.

For example, your eventual goal might be to give an inspiring, informative speech in front of several hundred people.

The intermediate goal right next to it might be speaking in front of a few dozen people. If that’s still too scary, your next intermediate goal could be joining a local Toastmasters club, where you will find people who are excited and happy to listen to you and give you feedback, no matter what level of public speaking you’re at. Or even further, you could just ask a few of your friends to get together sometime so you can stand up in front of them and give a short speech on a topic you find interesting.

Then, once you find an action that’s still scary but doesn’t make you freeze up faster than sticking your hand in liquid nitrogen, you can go ahead and take it! After a few times, you will become comfortable with this action – you will have built up some confidence and expanded your comfort zone.

Then you move on to the next similar-but-slightly-scarier action. And before you know it, you will have snowballed all the way to your original goal.

It can be a bit tricky to make friends when you move to a new place. But again, the snowball effect comes to your aid.

As soon as you make even one friend, or even acquaintance, your options will open up.

I’ve bolded the important part that a lot of people miss out on.

It’s okay to ask for help. And being new in a place without many friends is a great time to ask.

Just mention that you’re looking to make friends, mention some of your interests, and ask your existing acquaintances if they know anyone you might want to meet.

You can also look at what’s happening in the vicinity. Whether it’s a pottery class or a guided visit of some caves. Whatever interests you. Any such event is a chance to meet people, and as soon as you make even one acquaintance, it again opens up a lot more possibilities.

As long as you’re reasonably adept at talking to people, once you get past the initial sticking point of actually meeting them, you will be able to make acquaintances and meet again. (If you’re not sure how to be interesting to talk to in the first place, leave a comment or shoot me an e-mail. If there’s enough demand, I’ll write a post on the topic.)

And the more friends you make, the easier it will be to get invited to events or organize little get-togethers, and before you know it, you will have a steady social circle of friends to hang out with.

Using the snowball effect in your own life

To harness the snowball effect, pick a change you would like to make in your life. Then think about how making a little bit of that change can help you make more of it.

Sometimes you’ll need a bit of extra thinking to make it work. Like with the friends-making example – it’s not immediately obvious to most people that you can just ask to be introduced to more people you might find interesting.

But no matter what your desired outcome is, I’m confident you can harness the snowball effect.